What to Avoid When Terminating an Employee

2. Firing in an Unlawful Manner

Despite the at-will law that states an employer can fire an employee without any reason, many employees still feel they cannot be fired without a real good reason. It’s important that employers become familiar with employment laws so they do not terminate an employee in an unlawful manner. Although they can fire anyone at will, they cannot do it based on race, gender, age, disability, national origin or religion or they are breaking discrimination laws.

3. Firing Without a Witness

The actual termination of an employee can be stressful to both parties, and things may be said that shouldn’t have been said. In the case of a lawsuit, it often comes down to a “he said-she said” situation, which is why it’s important to have a witness present during the termination process. The termination shouldn’t take place around other employees in the workforce but should take place in an office with another party present. This protects both the employer and the employee. 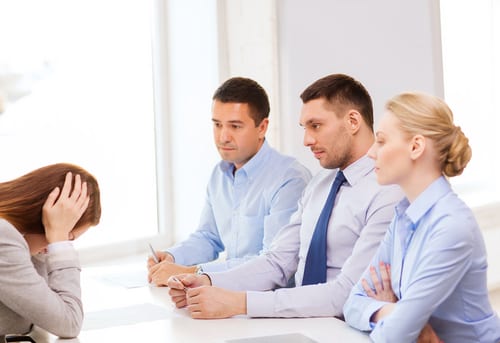 4. Letting Them Think it’s Not Permanent

5. Letting the Process Go On Too Long

If it’s come to the point where termination is the only choice, there really isn’t any reason to rehash all the reasons. This can make a difficult process even harder. Doing it quickly can allow the employee to hang onto his or her dignity despite being terminated. It’s not unusual for an employee to ask why he or she is being fired, and it’s important that the employer has an answer prepared before the actual termination takes place. Additionally, the answer should be detailed enough to understand but quick and honest enough to where no one is being blamed. The less an employer says the less the company may have to defend in a potential lawsuit.

Whether it’s the employer who has to terminate an employee or it’s the employee getting terminated, it’s important that both parties are familiar with their rights and with employment laws. The U.S. Department of Labor offers information on termination that can be helpful to everyone involved.